In the News: Extreme Heat and Climate Change

Today the National Oceanic & Atmospheric Administration (NOAA) released their National Climatic Data Center State of the Climate Report for the month of July (supplemental data available here).  According to the report,

July 2012 [was the] hottest month on record for the contiguous United States [as] [d]ought expands to cover nearly 63% of the Lower 48; wildfires consume 2 million acres... [resulting in] the warmest 12-month period the nation has experienced since  record keeping began in 1895. 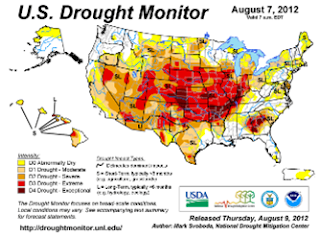 For previous editions of the U.S. Drought Monitor Report access the NIDIS' Drought Monitor Archives. The archives which date back to 1999, are a bit cumbersome to navigate as you have to actually click through which data sets you want to view,

do, however, allow for side-by-side comparisons as well as PDF and image downlads of each report.